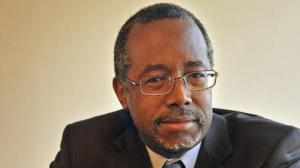 What’s on my mind? Dr. Ben Carson and his dreadful comments regarding people choosing to be gay.  Here is a man who is lauded as one of the most brilliant surgeons of our time making some very provocative remarks about someone’s sexual orientation. Put a pushpin in that because I’m coming back to that point in just a second.

Yesterday, the news broke out that Dr. Ben Carson, neurosurgeon, conservative, and presidential candidate hopeful, made the remark that people choose to be gay. He pointed to prison sex as an example of this behavior. Since then he has apologized for his remarks saying that it was taken out of context.

“I do not pretend to know how every individual came to their sexual orientation. I regret that my words to express that concept were hurtful and divisive. For that I apologize unreservedly to all that were offended,” he added.

Nah, nah Uncle Ben. Don’t try to back track now. Those words are out there now. And just like tossing feathers in the wind you can’t get them all back. Someone needs to school him on choosing his words carefully especially if he’s in the public eye like this. Furthermore, I don’t believe him. I believe he feels this way to his core but only apologized because of the backlash. Or someone pressed him to apologize because he’s trying to be president.

Let’s look at his remark about prison sex. It is true that gay sex happens in prisons. But more than likely these men (or women) were already gay when they came to prison. They weren’t “turned gay”  because they had anal or oral sex with a man. The other kind of prison sex is forcible or rape. Anyone who knows about the psychology behind rape knows that it is an act of violence and control not sex. A rapist, in prison or otherwise, isn’t necessarily getting his rocks off.  He’s trying to exert his power over his victim. They used to call that “poppin a punk” in prison.  Where does Uncle Ben get choosing gay sex from that?

What’s weird to me is that Uncle Ben wants to be president of the United States with this kind of thinking. Like run this country.  He wants to represent us to the world. He wants to represent a country where just under 2 percent of the population identifies as gay and where more than 30 of the 50 states have legalized same sex marriages.  Not to mention the boat loads of people who are straight but fully support their gay children, siblings, and friends. GTFOHWTBS Uncle Ben!!

Remember that pushpin I asked you to put in the intro to this post? Take it out cause I’m wrapping this up. People do laud this man as being a brilliant surgeon and an inspiration and he totally is but remember one thing: he’s not perfect nor will he ever be. He can save conjoined twins but that doesn’t mean he can’t be a total asshole.  We have to stop putting people on pedestals because of their job or the consonants in front of their names.  There are many people who do wonderful work in the community at home and abroad but that doesn’t mean I want to go have a beer with them. Doctors (MDs and PhDs), ministers, politicians, executive leaders, etc. are human first.

Oh, Uncle Ben. Use your gifted hands to keep your foot out of your mouth and let other people handle American politics.

One thought on “About Uncle Ben Carson’s Remarks Regarding Gays”